Skydiving in Ohio Since 1969 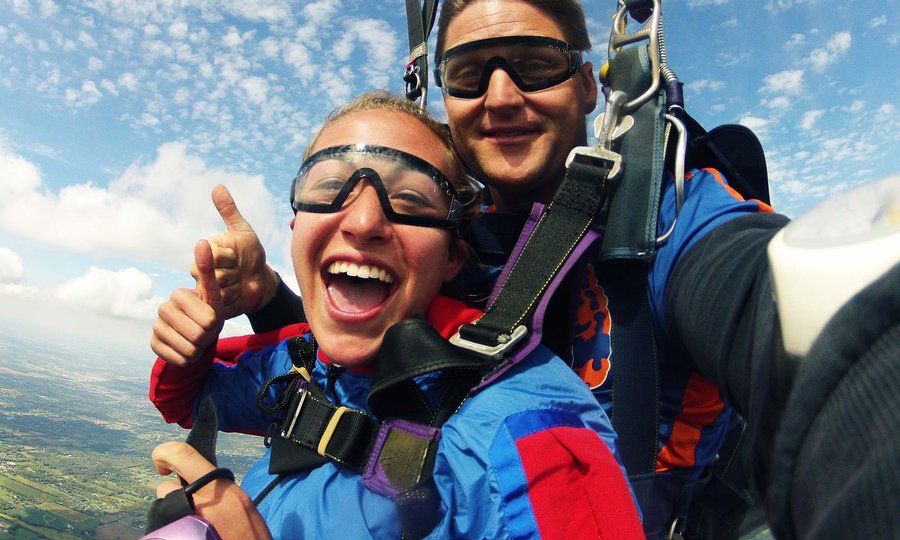 The History of Skydive Cincinnati

Skydive Cincinnati, formerly known as Skydive Warren County, is truly a unique family business with roots in aviation stretching as far back as 1945 when "Grandpa" Red Stewart purchased 40 acres of land in Waynesville, Ohio. Red and Irene Stewart raised their sons, Emerson "Cub", Steve, and David in a house attached to the main aircraft hangar at the newly developed Waynesville Airport located on Rural Route 2, now known as State Route 42.

In 1960, a group of skydiving pioneers, the Cincinnati Sport Parachute Jumpers, made their home at Waynesville Airport and thus planted the seed that would eventually end up as Skydive Warren County, now known as Skydive Cincinnati.

While all three boys thoroughly enjoyed all aspects of aviation, Steve's passion was skydiving. The skydivers taught "Little Stevie" how to pack parachutes and let him assist with small chores of the skydiving operation.

In 1966, "Little Stevie" was able to make his first skydive at Waynesville Airport at the age of 16. During high school, he continued with his passion and became a proficient skydiving instructor. In 1969, the year he graduated from Waynesville High School, Steve started the Waynesville Sport Parachute Club. The Cincinnati Sport Parachute Jumpers, then known as the Queen City Skydivers, had decided to hang up the operation and hand the reigns over to Steve.

Beginning in 1969, the business began as a few young kids just out of high school with a passion for true human flight. Steve Stewart combined professionalism, innovation and safety to create one of the world's most intriguing family businesses.

Steve became extremely interested in the growth of the skydiving industry and wanted to bring the joy that he experienced every day to the mainstream. In addition to skydiving instruction and licensed skydiving services, Steve became an Federal Aviation Administration Master Rigger and Designated Parachute Rigger Examiner and in 1977 Steve developed one of two of the first modern "piggy back" container system in skydiving called the Sweethog. At the time, the majority of parachutes in use were military surplus equipment and home made variations of this type of parachuting equipment. Steve was one of the pioneers to bring the main and reserve parachute into one container system which was worn on your back, rather than your main parachute on your back and your reserve parachute on your front. This type of container system is now an industry standard and has dramatically improved the safety and reliability of parachutes today. The Sweethog, having gone through many dramatic changes since the past, can still been seen on skydivers across the globe.

In 1987 the Stewart's and their young children embarked on a journey in Richmond, Indiana to bring the sport of skydiving to a completely new level by starting what is now known as Richmond "THE" Boogie. A six-day skydiving festival for area licensed skydivers to jump out of exotic aircraft and with the best professionals in the industry. This event became the second largest skydiving event in the world, second only to the World Free Fall Convention in Rantoul, Illinois. The final event was hosted in 2009 making for a 22 year stretch... one of the longest, continuously operated skydiving events in the history of the sport.

The Stewart's hosted the event every year and found, in Richmond, the possibility for expansion for their overwhelming large business. Having made solid relationships with the Board of Aviation Commissioners in Richmond, Indiana he and his wife Janie decided to take the next big step, moving the main facilities from the family airport in Waynesville, Ohio to the spacious Richmond Municipal Airport in Richmond, Indiana.

Beginning in 2001, one of the first 3rd generation skydiving centers made its debut with a fresh new face and new ideas with the Stewart kids. At the DZ now you will find the now adult "kids" (with the occasional cameo from Dad) all working towards one common goal... to raise skydiving to new heights!

We consider ourselves a lucky group of people to have have enjoyed a fantastic success with our family and business; introducing, every year, thousands of people to the exhilaration of human flight, helping people overcome obstacles and helping to enrich their lives with adrenaline, community and family.

FUN experience! Everyone should give it a try at least ONCE!